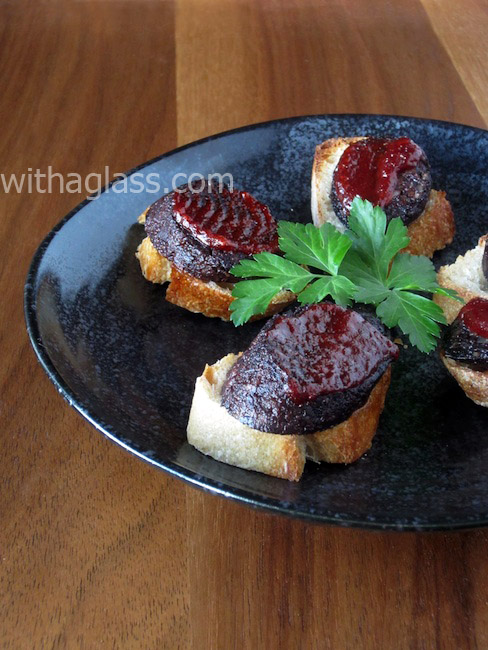 I know in the spring I should normally start craving light green salads, raw vegetables, grilled fish… but what can I do if one day I know I simply must have some black pudding? Apparently black pudding – also called blood sausage – contains a lot of iron (it is made mainly of blood) and since I don’t eat much beef, another iron provider, I suppose I might lack it quite often. Another thing is I am a huge fan of good black pudding, so I don’t know whether my craving is a need or a very strong urge to have something delicious.

Practically most European countries have their own versions of black pudding and whenever I can, I love discovering new ones. Some are excellent, some weird and some uneatable. Apart from the blood, black puddings usually contain some offal and, to keep a firm shape, rice, bread crumbs, buckwheat or barley are added. In France, where I buy my black pudding (not here in Switzerland, where all the black puddings I had were too bland for my taste), usually the fat and onions are the “filling” ingredients, but some regions use rice. Every butcher has his own version of black pudding (boudin noir), though the differences within the same region are tiny. The problem – which doesn’t arise in certain countries – is when it gets hot, the French simply stop buying black pudding and most butchers stop selling it. The clients affirm it’s the fat content and heaviness that don’t go well with hot weather. However they keep on eating greasy sausages and heavy pâtés… In fact, their black pudding refusal comes from the ancient restrictions dating back to the time when fridge, freezer and dried blood were unheard of and when black pudding could be made and sold only in pigs’ slaughter periods.

Those who, like me, are in the minority, have to enjoy it fresh until the end of April and sometimes May, then freezing is the only way to survive until September. For me the best black pudding is with hot spices, but it very very difficult to find, hot spices usually hiding a lower product quality… I buy the standard, but good one instead, and spice it up. The most frequent way I have it cannot really be called a recipe, but rather an idea. It consists of grilling toasts with black pudding slices, glazed with gochujang, Korean hot pepper paste, with highly addictive umami taste.(Click here to find a more than complete gochujang guide on One Fork, One Spoon blog). They can make a good lunch, if served with a green salad, but they are most of all good and nourishing snacks. They make excellent and original canapés and, while I’m thinking, why not a British inspired breakfast?

Before the recipe, a quick reminder of how my gochujang box looks like: 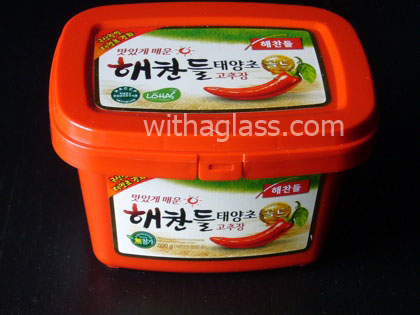 a couple of tablespoons gochujang

Place the black pudding on the bread slices.

Spread approximately 1/2 teaspoon of gochujang on top of each canapé.

Put under the grill and grill them until the black pudding starts sizzling and gochujang caramelising a bit (don’t let the gochujang change the colour: it means it has burnt!).

Serve either as finger food, snack or as a lunch, with a green salad.