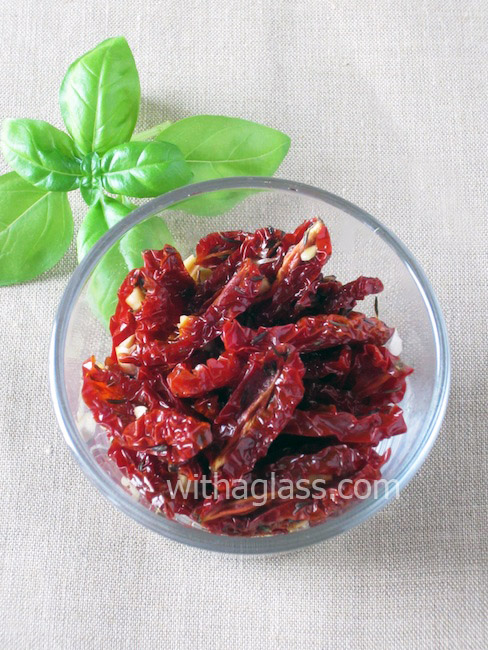 One is not supposed to refrigerate tomatoes since they easily lose their delicate aroma at lower temperatures. I manage to follow this advice, but when the summer becomes particularly hot, there is a risk of ending up with ugly, wrinkled tomatoes. This was the case with my beloved datterini I found last week dying in my pantry. If you have never heard about this variety, datterini (“small dates” in Italian) are ovally shaped, most luscious, sweet, but slightly tangy, highly aromatic mini-tomatoes. The ones I have been buying for months come from an organic farm in Sicily and – strangely – taste equally good all year round. Tere was no way I would throw them away, even in such a critical state, and I thought it was a good occasion to make my very first tomates confites, aka semi-dried tomatoes. Not only has it saved my datterini, but this way I discovered one of the easiest and most extraordinary things one can do with tomatoes.

I first heard about tomates confites reading “Grand Livre de Cuisine: Bistrots, Brasseries et Restaurants” by Alain Ducasse, one of my favourite cookery books. I have adapted the recipe to my tiny tomatoes, leaving the skin and seeds, but the result was thoroughly satisfying. “Semi-dried” seemed the best and simplest English name, but tomates confites are also called “slowly roasted tomatoes”, “slowly baked” or even “moon blush tomatoes”. The method consists of slowly drying seasoned tomatoes at a very low oven temperature until they are well shrivelled, partly dried, but still soft. Semi-dried tomatoes are excellent in salads, on a pizza, in tarts, in pasta, in sandwiches. You can also serve them simply along with olives and other tidbits as an aperitif snack.

Semi-dried tomatoes can be preserved in oil for a bit longer (see below), but since I had only a small bag, I simply refrigerated them as they were, in a closed jar (they stayed fresh for several days). It’s of course and excellent way to save dying, wrinkled, no longer fresh and plump tomatoes, but if you have your own garden, it’s also a great way to deal with a big batch (the tomatoes shrink a lot).

TIPS: The below seasoning and oil amounts should be treated as approximate. Everything depends on your preferences and imagination.

The degree of dryness also depends on your preference (the ones you see above were probably at the limit of semi-dryness).

If you prepare it with big tomatoes, you might want peel them and remove the seeds before drying.

Cut the tomatoes in half lengthwise.

Put them in a big bowl, add the remaining ingredients and, with your hands, make sure they are well mixed with the tomatoes.

Place the tomatoes on a sheet of baking paper, skin side down, and bake for 4 hours, checking every 30 minutes after three hours if they do not dry too much.

Let them cool down and keep in a closed jar, refrigerated, for maximum a week, or cover them with warm oil and keep in the fridge for two weeks (some people say they keep fresh covered in oil for several months but I haven’t checked it).