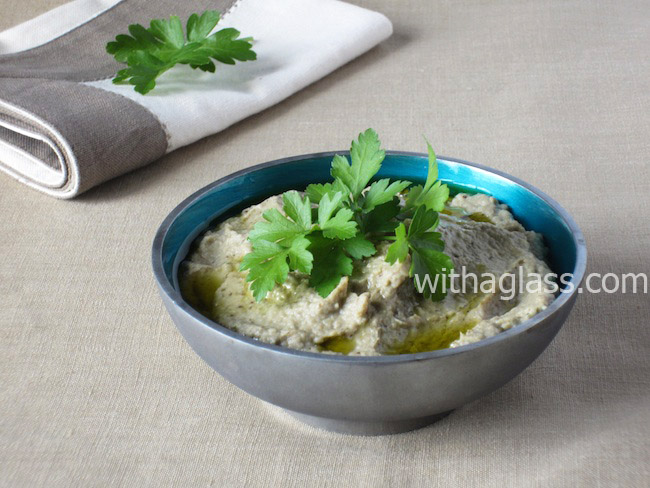 Baba ghanouj/ganouj or baba ghanoush/ganoush (apparently meaning “spoiled dad”) is a Lebanese mixture of grilled aubergine flesh, olive oil and some other ingredients, such as garlic, lemon juice and sesame paste. It is less known than hummus, but is much much lighter. It is served as a dip with other mezze (a selection of small dishes) or as a side-dish with grilled meats and vegetables. Similar, mashed aubergine-based dishes exist in Egypt, Turkey, Pakistan, India, Bulgaria… In France every aubergine purée is called “caviar d’aubergines” (I know what most of you think…).

Since it is one of the most popular Lebanese dishes, probably every Lebanese home cook has his or her own recipe. I have found mine on the French blog Cuisine libanaise par Sahten, full of Lebanese recipes (and not only). Sahten says that when yogurt is added to baba ghanouj, it is called moutabal and I should probably say I have made m’tabal. On the other hand yogurt exists in many recipes still called baba ghanouj, so I have decided to put both names.

Anyway, the taste is all that counts and here I haven’t been disappointed. This aubergine spread is light, flavoursome and, like lots of aubergine dishes, has a slightly mushroomy taste. If you grill the aubergines over the open flame, baba ghanouj will have a smoky flavour too. Apart from the above typically Lebanese serving ideas, I would advise it as a sandwich or wrap spread, certainly lighter than mayonnaise or butter.

Preparation: 30 minutes – 1 hour (depending on the aubergine preparation method) + about 2 hours in the fridge

Grill the aubergines in the oven, over the open flame or on a grill until the skin is completely black and burnt.

Take out the flesh, mix it with garlic, lemon juice, sesame paste and salt.

Put into the fridge for about 2 hours.

Serve sprinkled with parsley and a dash of olive oil.