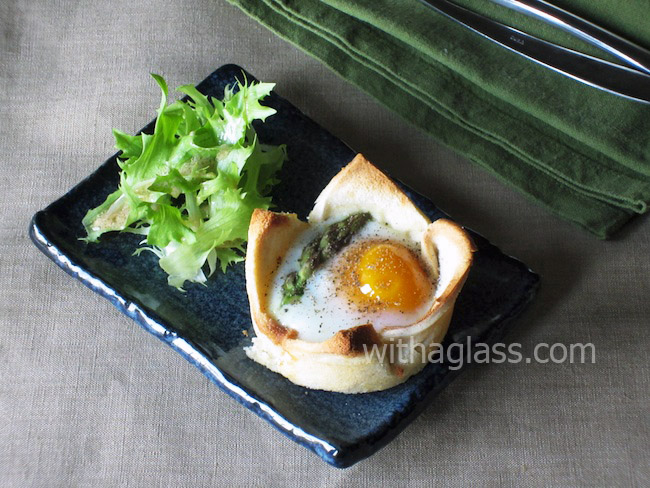 All the asparagus fans will probably agree that a rare magic operates when an egg gets in contact with delicious green spears. Therefore, the successful outcome of this small experiment was neither a feat nor a surprise, but I was glad to learn another way to serve asparagus and to discover another  perfect spring brunch: it is easy, quick, amusing and features the star of the season’s vegetables.

I love individual dishes, desserts and snacks, but bread tartlets are special also because they are one of the reasons why I appreciate soft, sliced toast bread (also called “sandwich bread”, but it is not my idea of a good sandwich…). I remember I saw this bread for the first time maybe only as a teenager. It appeared sliced, packed in plastic, had a suspiciously long life and was sold only in supermarkets, so I have always associated it with convenience – or even fast – food. Then, I slowly started to prefer it in certain snacks or dishes, such as bread tartlets, which for me give this super-soft bread a real raison d’être: no other bread I know is flexible enough to be easily rolled out, flattened and then shaped into an edible container. You can experiment with other types of bread of course, but it must be soft, dense (not with big wholes, like baguette for example) and elastic enough to be folded.

Until last week I had always prepared bread tartlets with ham and egg, the version I found years ago in “Si simple, si bon!” (So good, so simple) by Josée di Stasio. It was so simple and so good (the pun was unintended!), I have never felt the need to modify it. Now that I dared changing it, I somehow feel that this asparagus twist (which I have also tested with ham) announces a long list of experiments with other seasonal vegetables. (I actually already have several in mind…).

Josée di Stasio calls this tartlet a “ramekin”, but I thought the word “tartlet” was more appropriate (I think it could also be called a “bread basket”). She also recommends baking the tartlets in muffin moulds, but I usually prefer individual baking dishes (ramekins) which are wider, higher and make bigger baskets. Retrieving the tartlets from the ramekins may be delicate, but somehow even such a clumsy person like me has always succeeded, helping myself with a knife and then a spoon.

Here are some other suggestions for asparagus lovers:

TIP: If you don’t like crunchy asparagus, you can blanch it before making these tartlets. (I prefer it crunchy, so I never do this).

Special equipment: muffin moulds or individual round baking ramekins with approx. 8 cm/about 3 in diameter (if the bread slices are 10×10 cm/about 4×4 in, but if they are bigger, take bigger ramekins)

Ingredients (for one bread tartlet):

(one or more ham slices)

Roll out the bread thinly with a rolling pin.

Cut off the crust (it burns easily).

Spread butter on one side of the slice.

Butter the ramekin or the muffin mould.

Line the ramekin with the flattened slice (buttered side down) so that it forms a basket.

(Put some mustard at the bottom if you like to spice up the dish.)

(If you wish to add ham, line now the bread “basket” with a slice or slices of ham).

Cut off the hard bottom part of the asparagus spears (I usually cut off about 1/3).

Cut the rest into bite-sized pieces and place at the bottom of the bread tartlet, keeping one tip (you will put it on top after the egg for decoration).

Break one egg into the tartlet.

Put the tartlet into the oven and bake until the egg white is set (this depends to your preference: I prefer the runny yolk but the white must be completely set).

Take out of the baked tartlets (separating from the walls with a knife and then scooping out with a spoon should do the trick), season with salt and pepper, and serve hot with a green salad.

50 Replies to “Bread Tartlet with Egg and Asparagus”