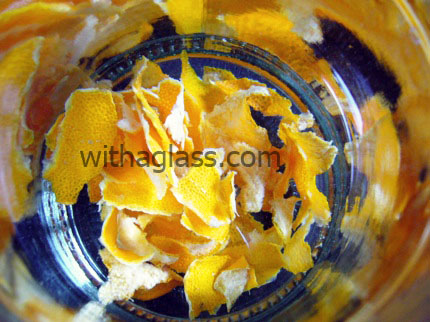 Have you ever considered using up mandarin peel? I bet not. Unless discovering a use of a generally scorned and discarded fruit, vegetable or meat part is for you (like for me) one of the most thrilling culinary moments.

This crazy idea started to haunt me as soon as I have peeled this Winter’s first mandarin. When I was at the third one and the beautiful aroma started to spread around the house, I thought I really had to find a way of using it. Since I don’t like candied orange nor lemon zest, I haven’t even bothered to see if it was a possible mandarin peel transformation. Then, when googling “mandarin peel” in different languages I was guided to one of the most fascinating websites: a Polish forum for home wine and liquor makers. The discussion around the mandarin vodka and favourable opinions convinced me quickly it was what I was looking for.

Most Polish home made liquors (called nalewki) require patience and are ready to taste only after a couple of months or even a year. Aging improves them and apparently in the olden times, when life pace was slower, a nalewka was made to celebrate a child’s birth and the bottle opened only at his or her wedding day! Luckily, there are several surprises for the impatient, and the mandarin peel vodka is one of those. If everything goes smoothly, I’ll be able to drink it before Christmas!

Since, according to some forum users the vodka made according to the below recipe was too strong, I modified it, diluting the 90% alcohol with water. I am not a chemist nor a home made liquor specialist, but apparently the alcohol has to spend two days diluted with boiled and cooled clean water (and never the same day you start preparing the vodka).

Warning! Since I have never tasted mandarin vodka, not to mention making it, I cannot guarantee the result (but will make an update – enthusiastic I hope – in 16 days!).

UPDATE: tasted after one month, the mandarin vodka is surprisingly delicious for such an effortless preparation. It is a bit sweet (not as sweet as liqueurs), but quite strong! The mandarin aroma is overwhelming! Some who tasted it say it reminds them of Cointreau, but I think it’s exaggerated (Cointreau has a much more complex taste and aroma!). In short, it’s really worth trying, and maybe it can be added to drinks, instead of Cointreau…

Peel the mandarins. Dry the peel (for example on a radiator) and stop drying as soon as it cracks (it took me 24 hours).

Weigh it and keep 5 grams of the dried peel.

Close the jar. Put it in a warm place (here radiators are useful once more, but don’t put the jar directly on them!).

After two days strain the peel and throw it away, keeping of course the infused alcohol!

Prepare a syrup with the sugar and the 200 ml water.

When it’s still hot (but not boiling), pour gradually the infused alcohol,  stirring.

Pour the vodka into a bottle. Close it and store in a dark place for two weeks.

At the beginning the colour will be glowing yellow, but it will “calm” a bit with time and become yellow straw.

Filter it (for example through a coffee paper filter or a piece of gauze plied in 4) into another bottle.

Close it well with a cork or a screw cap (or taste it straight away!).