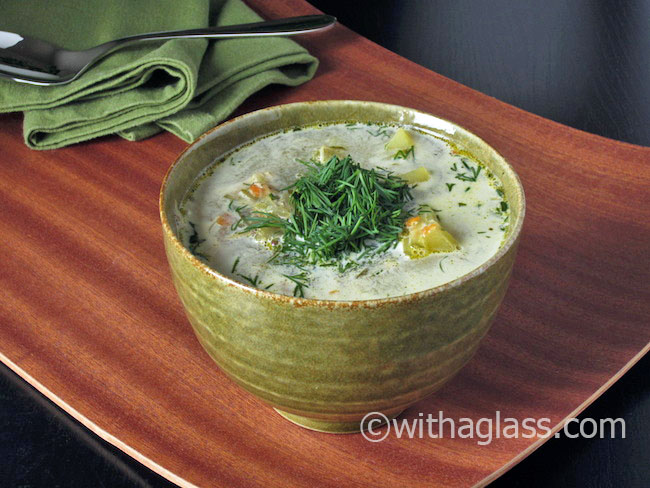 As soon as I wrote the title of this post I realised that probably for the majority of my dear readers salt-brined cucumber sounds much more unusual than coconut milk, but I was so pleasantly surprised to see how such geographically distant products go well together, I decided to post this international version. Anyway, whether it’s coconut milk or the traditional cow’s cream, this is one of the most delicious soups I know and I hope some of you will be tempted to make it. Maybe due to its tanginess or maybe due to the refreshing presence of the dill, I consider it a perfect springtime dish.

Since it’s a very popular soup, every Polish cook has her/his own method. I have based the instructions below on my mum’s recipe with, as always, my own slight modifications, including a lightened option (see the TIPS). I have experimented here with coconut milk instead of adding the traditional cow’s cream, but both options are equally delicious. Though not heavy at all, it’s a nourishing soup with potatoes, so, depending on the amounts served, it can be considered as a full meal (you can serve it with bread).

TIPS: Salt-brined cucumbers are fermented/pickled in a mixture of salt and water, with herbs and spices. They become sour, but not as harsh as vinegared ones. They are also relatively healthy (they have vitamin C, absent in raw untransformed cucumber), unless they contain too much salt of course. They cannot be replaced with vinegared pickles. Apart from Polish, Russian and Ukrainian shops, salt-brined cucumbers can be found in some German or Austrian shops too and I know they are also sold in “normal” organic grocery shops. Not to mention online sources.

If you cannot find fresh or frozen dill, forget this recipe (I must be very strict here because without dill it’s just not the same soup, while dried dill is almost as useless here as dried basil in a caprese salad…). It’s used here in big amounts, so its presence is very important. If dill is not used in your country’s traditional cooking, you might still find it at farmers’ markets and even in some Asian shops (I see it regularly in my Vietnamese/Thai shop). The good news is chopped fill freezes very well, so if your farmers market or Asian shop is far away, buy a big bunch, chop it and freeze. (It also grows very very easily from seeds, even on a window sill). Dill is also very popular in Greek cuisine, so you will find many ways to use your frozen batch.

I always remove fat from my stock, so here, once the stock was ready, strained it and put into the fridge. After several hours the fat will solidify at the top and thus will be easy to remove. You don’t have to follow this procedure of course!

Preparation: minimum 3 hours (depends on the choice of meat and fat removal or not, see TIPS)

Ingredients (serves 4 as a main dish or 6 as a starter):

2 chicken legs (I prefer skinned) or the equivalent of other meat (pork/beef), preferably with bone

1 big carrot+1 to be added at the end

(optional, but worth looking for: 1 small parsley root)

Put the meat, the leek leaves, the carrot, the celeriac and parsley root (if you can get it) into a big pan. Cover with water, add some salt and simmer, covered, until the meat falls off the bone (the time depends on the meat, but it’s minimum 3 hours to make sure the stock has deep flavours).

In the meantime grate the salt-brined cucumber (vegetable grater, not the one with smallest holes). Do not throw away the brine! You might discover you prefer your soup even more sour and add it later on.

Place the grated cucumber into a small pan, cover with water and simmer for about 20 minutes.

Once the stock is ready (or rather the meat is tender enough), remove the meat and the carrot. Strain the stock and throw out the remaining cooked vegetables (unless you like them).

Here you can either refrigerate the stock in order to remove fat (see TIPS above) or continue the preparation without the fat removal.

Remove the bones and cut up the meat into bite-sized pieces.

Cut up the cooked carrot and grate the raw one.

Peel the potatoes and cut into bite-sized pieces.

Put back the stock into the pan, add the potatoes and cook until soft.

Then add the grated cucumber, the meat, the carrots and let it simmer for about five minutes.

Adjust the taste with freshly ground pepper, salt and, if you find the soup not tangy enough, add some of the brine from cucumbers.

Just before serving chop some dill to every plate, add a splash of cream or coconut milk and serve.