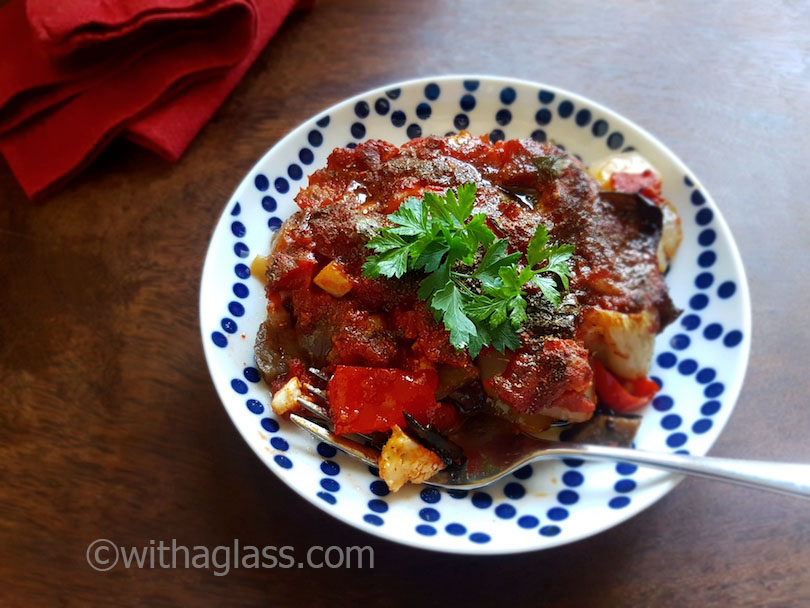 Just like every summer, I find it difficult to resist fresh, beautiful vegetables at my farmers’ market and usually end up with huge amounts. Last week, for example, I brought a bag full of beautiful aubergines and peppers. After making the delicious Bouyourdi from Katerina’s Culinary Flavors, my main source of Greek culinary inspiration, I still needed to cook the aubergines, so I turned to my cookery book library, a constantly growing huge collection, which I don’t put into practice even half as often as I should. Staying in the same geographical theme I searched through “Greece: the Cookbook” by Vefa Alexiadou. I have recently learnt the author is extremely famous, especially thanks to her culinary tv programs, but I was mainly seduced by the lovely cover and the impressive content : more than 700 pages to leaf through for hours and hours… This is where I found this fantastic casserole, which might not look very convincing on this photograph, but which proved so sensational  I ate several portions the same day: for lunch, for dinner, as a snack, as another snack. And for breakfast the following day! Though the dish differs from Katerina’s Bouyourdi, it has similar qualities: it’s light, full of summery flavours, it is equally good – or sometimes better – when reheated and… it’s one more way to cook my beloved feta!

I have modified the recipe, changing slightly the cooking process, opting for a low-fat version, adding some hot chilli peppers and I was also quite liberal with the amounts, so do check Vefa Alexiadou’s book if you want to read the original. (I also discovered it’s twice better when a splash of good olive oil is added to individual portions just before serving, so make sure you taste it this way!).

If you have peppers and feta, but no aubergines, I suggest checking Katerina’s Bouyourdi, which is another absolutely delicious summery baked dish.

TIPS: The original recipe calls for long green peppers, but the long yellow and red peppers were a good substitute. I made this dish once more with bell peppers and it was much worse because of the thick skin, I guess (bell peppers also don’t have such a wonderful aroma as long peppers), so look for long sweet peppers.

This is an extremely versatile dish: served with good quality bread/flatbread, it’s perfect as a vegetarian meal but also as a side-dish (with grilled meat), a starter or simply a snack/meze and it makes a healthy awakening summer breakfast!

Do not hesitate to make a big portion, keep it refrigerated for several days because it’s absolutely delicious reheated (even in a microwave).

As a chilli addict, I instantly thought of including fresh chilli peppers. If you decide to spice up this dish, I advise green chilli which has fresher flavours (though at worst red fresh chilli should be delicious too).

1/2 kg (about 1.1 lb) sweet peppers, preferably long (green, yellow or red) because they have a thinner skin, cut into pieces similar in size to aubergines

400 ml (about 13.5 fl oz) canned tomatoes (you can of course use fresh ones instead, chopped and skinned or not)

3 tablespoons chopped fresh parsley (+ more to add before serving, if you want)

Heat two tablespoons oil in a big pan (or brush and heat the grill).

Stir-fry the aubergines at medium-high heat until they are browned. Lower the heat, put a cover and let them cook slowly until they are soft (not mushy, but really soft). If your pan is not big enough, do it in two batches (they should be in one layer).

While the aubergines soften, start preparing the tomato sauce in a different pan. Heat one tablespoon oil in a pan, add the onions and when they are soft, add the garlic. Stir-fry for one minute, add the crushed tomatoes, salt, pepper, chopped parsley and let the sauce simmer until it has thickened and become more or less homogenous.

Do the same with the sweet and hot pepper pieces (it takes less time with peppers).

Place the aubergines and the peppers in a shallow baking dish, add some salt and mix with a spoon, distributing evenly. Crush the feta on top of the vegetables (you can also attempt to cut it into cubes before) and cover with the tomato sauce. Bake for about one hour.

Sprinkle with oregano, add a splash of good olive oil to each plate and serve warm (somehow I didn’t like it very hot).

This dish keeps for several days in the fridge and is delicious reheated in a pan (microwaved too!).