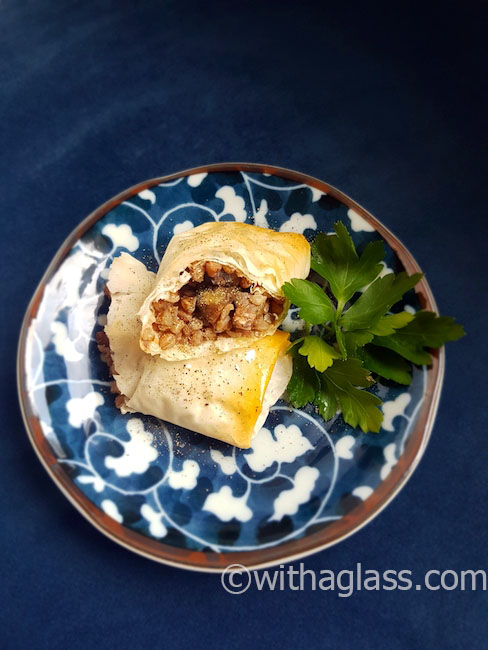 If you like Japanese soba noodles and don’t mind a typical coarse texture of certain grains, you might be tempted to test this combination of buckwheat and mushrooms in crisp thin layers of Greek filo rolls. I can only hope you will love the results as much as I did. If you have never tasted buckwheat, forget all the health benefits you have heard about (I know it puts some people off…) and see it as I do: just another delicious fuss-free carb, versatile enough to go with Greek pastry or spicy Korean meals.

I know many people put it in the same bag as quinoa or other recent wonder food discoveries, but in countries where buckwheat groats/grains have been eaten for generations (Ukraine or Poland, for example) it’s simply an alternative to rice, potatoes, pasta or bread. The traditional method is to toast the grains before selling them and I advise against the non-toasted version (see the TIPS below). In Poland it’s eaten mainly with meat or mushrooms (or both) in sauce, but sometimes also as a filling in dumplings; I guess there are also some regional dishes I’m not aware of. I grew up eating buckwheat quite regularly topped with meat in sauce and I’m pretty sure my mum never insisted on it as being healthy (the way she did with some vegetables…). This attitude made me appreciate buckwheat the way it is: beautifully nutty scented, strong-flavoured carb that nowadays reminds me at the same time of Polish and Japanese cuisines (a curious and rare coincidence!).

It might be seen as a step too far by some of my dear visitors, but I see buckwheat most of all as a nice change from rice in many Asian dishes. After many experiments I realised it’s more versatile than I thought! I find it perfect with spicy Korean dishes, such as bibimbap or the Chicken Simmered in Gochujang Sauce. It’s also delicious when replacing… rice in fried rice! Because of its nutty strong flavours, it pairs perfectly with mushrooms, such as in this Japanese-inspired eringi and teriyaki version.

When experimenting with buckwheat never forget a sauce (either served on top, aside or mixed into the dish) because buckwheat is very dry. I have served these rolls with the spicy Gochujang and Sour Cream/Yogurt sauce and it was just perfect:

This Greek Yogurt with Caramelised Onion would be fantastic too:

or this Bulgarian cousin of tzatziki:

I have posted two other buckwheat recipes, both very easy, so in case you want to explore other options…

TIPS: If you have never had buckwheat, make sure you buy a toasted version (the colour is medium to dark brown, while the non-toasted is light greenish), which is the traditional one and which has these unique wonderful nutty flavours. The non-toasted one is bland, softer and, just like many people who grew up with toasted buckwheat, I hated the non-toasted form when discovered accidentally in a health food aisle in Switzerland.

Cooking buckwheat is not difficult, but follow the below instructions because it quickly becomes mushy and inedible. The result should be dry and crunchy.

Do not omit fresh parsley! It suits perfectly the mushroom and buckwheat mixture.

Make sure you have another sheet or two of filo pastry just in case… The mushrooms might lose more or less water and you might want to put more or less filling in each roll.

If, on the other hand, you have leftover filling, you can add some vegetables, even some meat leftovers, and prepare it like stir-fried rice, adding some soy sauce, putting a poached or fried egg on top…

The soy sauce is not obligatory. You can add some more salt to taste or nothing.

Ingredients (serves two if eaten with a salad as a main course):

6 – 7 sheets of filo pastry (make sure you have one or two more, just in case you have more filling to use up)

6 tablespoons low-sodium soy sauce or 3 tablespoons normal soy sauce (I use Japanese soy sauce, but if you use Chinese, choose the light coloured one)

a handful of chopped fresh parsley

thick creamy sauce (such as the above gochujang sauce)

Put the buckwheat groats into a cup.

Measure the double of the buckwheat’s volume in water.

Pour the water into a pan. Bring it to a boil, add the salt.

Throw the buckwheat into the pan and let it cook partially covered at medium heat for about ten minutes.

Lower the heat and let it simmer, fully covered, for about 5 more minutes.

The water should be completely absorbed by the grains. If it’s not absorbed yet, put the pan aside, leaving the cover on and it will get absorbed without cooking too.

As soon as it’s absorbed, don’t uncover the pan and put it aside keeping it warm, for example wrapped in a blanket, though in this dish you use the buckwheat cold, so simply don’t lift the cover and prepare the rest of the filling.

Chop the shallots and the mushrooms.

Heat 1 tablespoon oil in a pan and stir fry the shallots at medium heat.

Put the shallots into a big bowl.

Stir-fry the mushrooms in another tablespoon of oil until they start losing volume, season them with salt and add to the shallots.

Finally add the buckwheat groats, the soy sauce and the chopped parsley.

Season with freshly ground pepper and combine all the filling ingredients.

Spread one filo sheet on a big chopping board.

Place horizontally, about 2,5 cm/1 in. from the filo sheet’s shorter edge which is closest to you, a portion of the filling (5-6 heaped tablespoons per sheet).

Roll tightly but delicately, starting from the edge which is closest to you, folding the two lateral edges into the roll, so that the filling doesn’t leak during the baking process (I have folded here about 3 cm/about 1,2 inch on each side).

Proceed in the same way with the remaining rolls.

(You can also cut the filo sheets in two and make smaller rolls; this is what I did obtaining the tiny size of rolls you see above).

Brush the top of the rolls with some oil or melted butter, place on a baking tray or baking paper and bake in the oven until slightly golden (about 30 minutes in mine). Watch them often as they tend to burn quite quickly.

Since the filling is dry, make sure you don’t forget a sauce!

20 Replies to “Filo Rolls with Buckwheat (Groats) and Mushrooms”