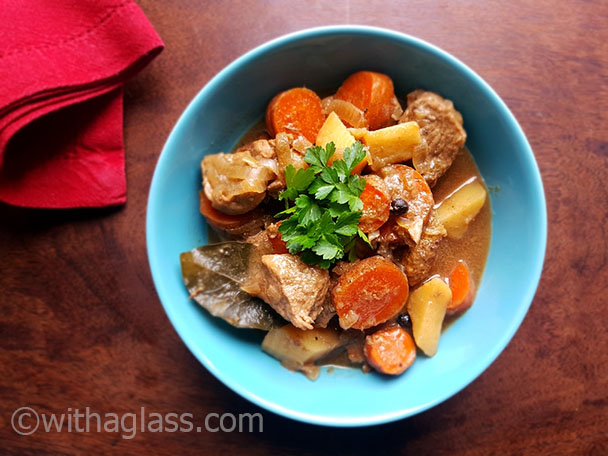 Polish cuisine isn’t really known abroad, but it’s usually thought to be fatty and heavy. Few people expect a variety of spices and herbs required to make Polish dishes taste genuine and allspice is a perfect example. Pork dishes are most often seasoned with the ubiquitous dried marjoram (see my Pork Roast with Prunes), but this stew, often prepared by my mum, contains allspice, a small dried berry responsible – with a little help from bayleaf – for the surprisingly complex flavours. I usually add only carrots, but this time I have thrown in some potatoes too and it was even better.

For those who have never heard about it, allspice (Pimenta dioica, from the family of myrtles) is sometimes called Jamaican pepper and at first sight it does resemble black peppercorn, but is not related to it. It is bigger, has a lighter, brown colour and has a very complex mellow aroma, unbelievably contained in just one small ball. The English thought it combined the cinnamon’s, nutmeg’s and cloves’ flavour, hence the name allspice appearing in the XVIIth century. First introduced in Europe in the XVIth century, allspice is strangely now absent from many countries’ traditional recipes. Even though allspice is widely used in the French Carribean territories, the mainland culinary France practically ignores its existence (Middle Eastern groceries are among the rare places where it can be bought in France). A couple of years ago I was surprised to discover the United Kingdom and Poland seem to be the only European countries, where allspice is widely available and popular (correct me if I’m wrong!). In Polish it is even called “ziele angielskie”, meaning “English herb” and is often used also in pickles (such as Pickled Fish with Allspice)

TIPS: If you don’t like carrots, replace them with any vegetable of your choice, adapting the cooking time (for example if you cook broccoli, add them 5 minutes before serving, unless you want them mushy).

This stew is usually served with gnocchi or pasta, but since I’ve used potatoes, I don’t think it needs any additional carbs.

This stew freezes very well, but without carrots and especially potatoes (potatoes are horrible defrosted, in my experience). You can cook it with pork only and then add vegetables when you cook it after defrosting.

If you don’t have any stock, use water, but if you want richer flavours, you can add a piece of carrot, a piece of celery and maybe some leek leaves (you will throw them away before serving).

Cut up the pork into bite-sized pieces (I usually cut the tenderloin in two lengthwise and then into thick slices). Sprinkle it with salt and pepper and coat in the flour.

Cut up the vegetables into bite-sized pieces.

Chop the onion or slice it.

Heat some oil in a pan, fry the pork pieces until they are browned. Add the onion, stir for a couple of minutes.

Add the potatoes, the allspice, the bay leaf, the soy sauce and cover with 300-400 ml water or stock.

Simmer uncovered, stirring from time to time. Add water if necessary (than remove the cover if your sauce is too watery).

After 20 minutes, add carrot pieces (and other, softer vegetables, even later). Continue simmering the stew avoiding the mushiness of carrots.

Adjust the taste with soy sauce or pepper and if you don’t want to pay attention to what you swallow, remove the allspice berries (they don’t taste very nice when accidentally crushed in your mouth).

11 Replies to “Pork Stew with Allspice”