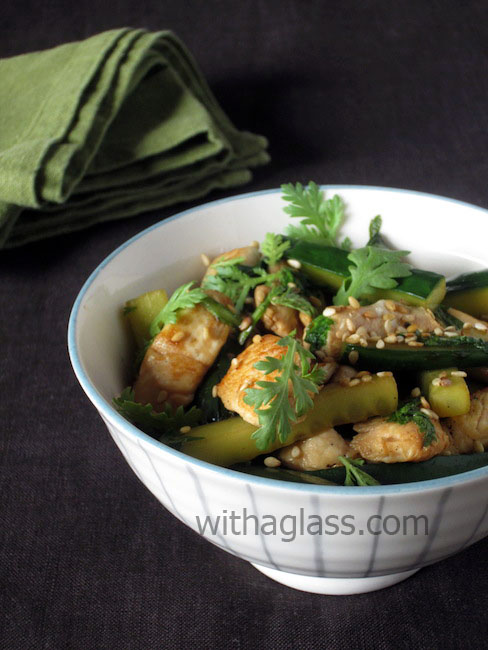 Learning that certain kinds of chrysanthemum have edible leaves which actually taste fabulous was a stunning discovery, so several years ago I bought lots of seeds in Japan, hoping this plant would grow on my balcony. I soon realised not only that this chrysanthemum was one of the easiest and fastest growing plants, but also that it could be harvested as already as April and as late as October. This year, for the first chrysanthemum cooking session I chose a very simple, refreshing chicken and cucumber stir-fry.

If you grow chrysanthemums for flowers, beware! Not all the chrysanthemum leaves are edible, but Garland Chrysanthemum (Chrysanthemum coronarium), aka crown daisy (called shungiku 春菊 in Japanese and sukgat in Korean) definitely is. According to Wikipedia it is eaten not only in Japan and Korea, but also in China, Taiwan, Vietnam and even Crete. Garland chrysanthemum is not only a delicious addition to cold and warm dishes, but it’s also very healthy: it contains minerals, vitamins, potassium and antioxidants. If you don’t have a garden, you can very easily grow it on your balcony or window sill, just like I do. As I have mentioned, this plant is probably the quickest and easiest growing among all the herbs I sow on my tiny balcony (well, maybe only rocket beats it) and I even harvest my own seeds every year.

Until now I’ve posted only one recipe with chrysanthemum leaves (Chawan Mushi/Egg Custard with chicken and Shungiku), but they are very easy to test in stir-fries, salads, soups and also simmered dishes. No matter how you cook them, you should add them at the last step because they wilt very quickly or even add them just before serving. Here I did both: warmed some leaves and then sprinkled some raw uncooked ones on top.

a small handful of Garland chrysanthemum leaves/shungiku (cut up into bite-sized length, if the leaves are long)

1 teaspoon mirin (or, if you prefer a less sweet sauce, add one more teaspoon of sake instead)

(some chrysanthemum leaves to sprinkle before serving)

Cut up the chicken into bite-sized pieces.

Sprinkle some salt (not too much because you’ll be adding soy sauce afterwards).

Heat the oil in a pan and the chicken until it becomes golden on both sides.

Add the cucumber, the sauce and stir-fry for 30 seconds.

Add the chrysanthemum leaves and and stir-fry for 10 seconds.

14 Replies to “Chicken with Chrysanthemum Leaves (Shungiku) and Cucumber”