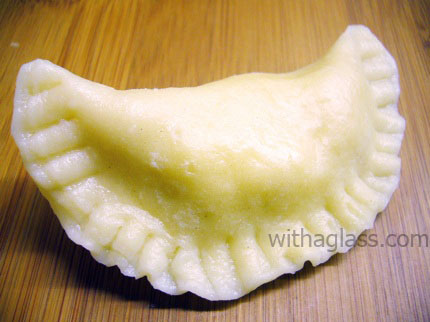 Ravioli, empanadas, gyoza, mandu… Dumplings – or pastry packages with various fillings –  appear in most of the traditional cookery books in the world. Pierogi (pronounced “p-ye-ro-ghee”), or Polish dumplings, have dozens of different traditional fillings, and their variations are infinite. They can be both sweet and savoury, bigger or smaller, with or without meat, but the pastry gives them the typical Polish touch. A bit thicker than the Asian one, it should be firm, a bit elastic, but never tough. Pierogi are also usually bigger than the Asian dumplings (not to mention the Italian ravioli), attaining sometimes a big fist size.

Even though I’m a declared carnivore, strangely, my favourite are the vegetarian pierogi (“pierogi ruskie”), filled with potatoes, curd cheese and fried onion. These ingredients make a very unusual and complex combination, impossible to compare to anything else and surprising when tasted for the first time. These dumplings’ name is erroneously translated as “Russian”, but they have got nothing to do with Russia. In fact, apart from a slightly offensive adjective meaning “Russian”, “ruskie” also refers to the region nowadays partly in Ukraine and partly in the Eastern Poland, and previously called “Red Ruthenia” (belonging to Poland before the 2nd World War). This is the region where this type of dumplings originated from. Consequently, they should be translated rather as “Ruthanian dumplings”. To make matters more complicated, the Ukrainians apparently call them “Polish dumplings”… 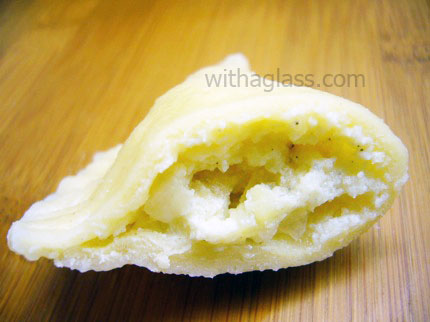 The Polish dumpling pastry is very easy to prepare, provided one has a kneading food processor. It is a bit longer and needs a bit of exercise when hand kneaded. A fork is the traditional tool to seal the edges and a very efficient one too. The dumplings are first quickly cooked, and then can be served straight away or fried. Some serve them with sour cream, others with chopped and fried cracklings or bacon or fried chopped onion. This pastry recipe comes from my mother and of course is the best! The filling is more or less the same in every “Ruthanian” pierogi recipe. Normally the dumplings are served as the main course, but if you make them smaller they can become original finger food.

Preparation: 1 hour – 1 1/2 hour (depends on your experience and kneading-rolling velocity)

Prepare the filling. Chop the onion and fry it in 1 tablespoon oil until slightly browned.

Mash the potatoes and combine with the cheese, the onions, the salt and the pepper. Mix well with a fork (not with a mixer!). Adjust the taste if necessary (the pepper should be very present in the overall taste).

Combine the pastry ingredients and knead them until the pastry is smooth and doesn’t stick to your hands, or combine them in a food processor. Mix them quickly with a kneading function.

Cover the pastry with plastic film, since it dries very quickly.

Roll out half of the pastry to a 1/2 cm sheet (some people prefer 1 cm thick). Take a round pastry cutter or a glass and cut out 7 – 10 cm diameter circles. Fill them with a tablespoon of the cheese mixture, seal with your fingers, put on the table and press down the rims on one or both sides with fork’s teeth.

Layer the filled dumplings on a plate, separating the layers with plastic film, otherwise they’ll stick to each other.

Bring two litres of salted water to a boil.

Cook 4-5 dumplings at a time, counting 3 minutes from the moment they appear at the surface.

(After the second or third batch they’ll start sticking to the bottom of the pan, so you should push them a bit after 30 seconds, otherwise they’ll never go up to the surface).

Serve them immediately with sour cream or sprinkled with fried cracklings, or fried bacon cubes.

If you want to serve them the following day, place them in a plastic box, putting cling film after each layer and closing the box tightly before putting them into the fridge.

15 Replies to “Potatoes and Curd Cheese Dumplings, or Pierogi ruskie”