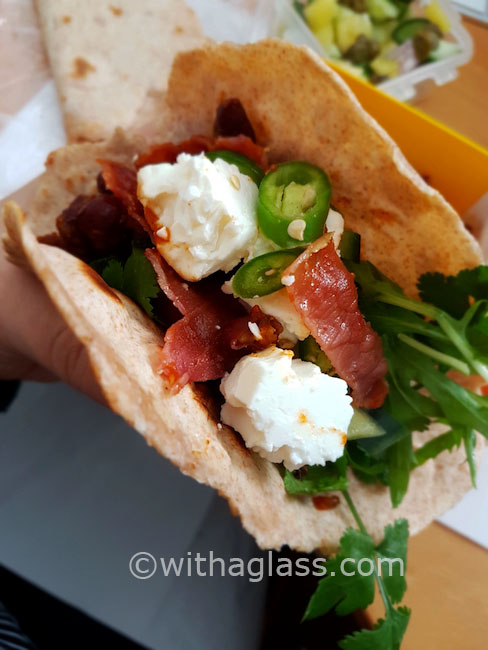 Before embarking on this flatbread adventure I had never tasted chapatti or even seen them in “real” life. I had read about them, seen on blogs and in cookery books, but had no idea (and still don’t have!) what texture and taste I should obtain. These chapatti are soft, taste slightly nutty and are absolutely delicious, in spite of their weird forms and scary look (normally chapatti are of course perfectly round, but I have never managed to roll them out properly…). They are quick to prepare, easy to reheat or defrost and so surprisingly versatile, I now treat them as international wraps (these above were perfect with feta and bacon for my office lunch) and wonder how I could eat the store-bought tortillas all these years…

Chapatti/chapati are, after naans, the second Indian flatbread recipe I learnt. (Maybe one day I’ll show you my naans… but they look even worse than my chapatti). Indian cuisine has a big array of breads, but I chose chapatti because I read somewhere they were to Indians what tortillas were to Mexicans. I also liked the fact that they are made simply in a pan (not in a super hot tandoori!) and are relatively quick to prepare. As I browsed through recipes, I found they were all similar (i.e. called for water and flour), but I also realised that many Indian home cooks obtain dry tough chapatti and seek for advice. I stumbled upon a chapatti thread on Indus Ladies where some advised to add curd and oil. I added yogurt instead of the curd, played a bit with the amounts and the resulting flatbreads proved soft, easy to cook and addictive. I am too scared to try and compare the traditional flour and water recipe, so I’ll stick to this one. Following Meera Sodha’s advice in Made in India. Cooked in Britain, I used half wholemeal and half white flour, the mixture which is apparently closest to the Indian chapatti flour (I think this adds slightly nutty flavours, keeping the dough acceptable for those who hate wholemeal products). 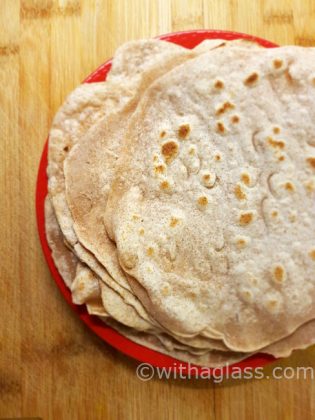 Even if you don’t cook Indian, I strongly advise testing chapatti as an alternative to store-bought tortillas (I plan to make those too one day, inspired by MJ’s beautiful perfectly round corn tortillas). I use them to wrap everything I find in the fridge: raw cucumbers, peppers, chillies, fresh herbs, chicken, ham, feta, tofu… and add Greek yogurt, sriracha (it’s perfect!) and pickles. They are of course delicious with Indian curries…

It’s difficult to say exactly how thick chapatti should be. I roll out mine about 1 mm – 1.5 mm thick. (If they are very too thin, slightly transparent, they will become crisp, not soft!).

Once prepared, chapatti will keep for two-three days in the fridge, tightly wrapped in plastic. They can also be frozen, but make sure you divide them, otherwise you’ll have to defrost the whole batch. I heat the refrigerated chapatti for 10 seconds in the microwave and defrost those from the freezer for about 20 seconds.

When frying the second side of chapatti you should press it and the best tool I found for that is a potato press.

Many sources advise leaving dough for 30 minutes (or even more) before rolling out, so that it becomes softer. I try to do it, but when I am in a hurry, I start grilling chapatti straight away and they are soft anyway (maybe not as soft as with the 30 minutes waiting, but the difference is small).

Preparation: about 30 minutes (+30 min for the dough to become softer, but it’s not absolutely necessary)

In a bowl combine all the ingredients and start kneading them.

If the mixture is too dry, add water by spoonfuls. If you add too much water chapatti will be drier, so don’t exaggerate.

Knead the mixture about 5-10 minutes until the dough is smooth and soft. Cover with plastic film and leave for 30 minutes (this is not necessary, but if you have time, do it because it makes the dough softer).

Divide the dough into big apricot-sized balls and cover them so that they don’t dry out.

In the meantime heat a big frying pan brushed with some oil (again, I use here coconut oil).

Roll out the dough into 1 mm thickness and grill at medium heat until bubbles show up (start rolling out another chapatti while the previous one fries).

At this point turn the chapatti over and fry for about 10 seconds, pressing it (a potato masher is perfect for that).

Place on a plate and proceed in the same way with other balls, brushing the pan with oil every second chapatti.

Cover the plate with plastic film and keep at room temperature until they cool down.

Then you can keep them for several days in the fridge or freeze them.