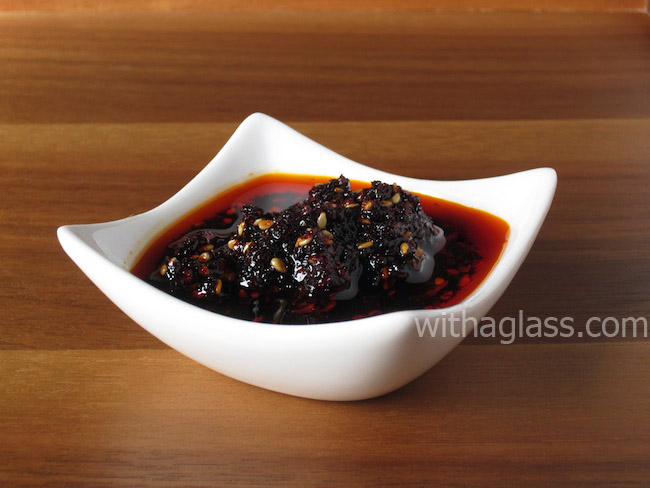 I am a lazy cook. If I prepare something regularly, you can be sure that at a certain point I will try to  simplify the method, to cut down the preparation time, reduce the list of ingredients, etc.. My beloved thick Japanese chilli and garlic oil (taberu rayu) is the best example. This lazy version is still delicious, but takes only about ten minutes (compared to the original fourty) and calls for less ingredients.

First of all, I owe a quick explanation to all those who have never heard of this thick chilli oil. Taberu rayu (食べるラー油) appeared in 2009 in Okinawa as a modified version of chili oil, originating from China. The name means literally “chili oil for eating” probably because a big part of the condiment is solid and this solid crunchy part is what makes this seasoning so special. It can be used on rice, noodles, on stir-fried meat/vegetables, added to soups just before serving, put into wraps, sandwiches, salads… The possibilities are endless.

As in case of most Japanese products sold in Switzerland, taberu rayu is quite expensive. Since we became addicted to it and were able to empty one tiny jar a week, I asked Robert-Gilles, from Shizuoka Gourmet if he knew a way to make this amazing seasoning at home. My generous and kind friend found and posted an excellent taberu rayu recipe, which I have been putting into practice about once a month for the past two years. In the meantime, I have also developed this simplified version, so now, when I’m in a hurry or just feel lazy, I am able to prepare it at the spur of the moment! Thank you once more, Robert-Gilles!

If you want to taste the more elaborate version, much closer to the real taberu rayu, here is the recipe:

100 ml (about 3,4 fl oz) canola oil (or another oil with a neutral taste, supporting high temperatures, for example grapeseed oil)

Heat both oils in a small pan.

In the meantime, in a big metal or glass (heat resistant) bowl, put the chilli, the sesame seeds, the sugar, the salt and the soy sauce.

When the oil is hot enough to fry the garlic (a bit of garlic thrown into the oil will stay at the surface, the oil will start bubbling around and instantly frying it), throw delicately the chopped garlic and take out as soon as it is slightly golden. It will take about one minute or less.

Do not over-fry it or it will become bitter.

Slowly, constantly stirring, pour the oils with garlic into the bowl filled with chilli.

Put into a jar and keep for one month at room temperature.