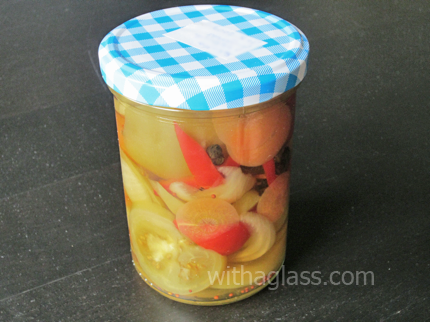 October seems to be the best moment to look for (or ask for) green tomatoes, at least on my market. I don’t talk about the always-green variety which is very sweet and often striped (I think it’s called sometimes “zebra”). What I mean are completely unripe tomatoes. They are acid, already have a pleasant aroma, but their flavour is still very shy. I started to preserve green tomatoes a couple of years ago when I realised how cheap they were (farmers prefer probably to get rid of the unripe tomatoes very quickly and sell them for almost nothing) and when I decided to recreate the green tomato salad I used to like as a child. Since I didn’t know anyone who did it at home, I looked for recipes on internet and modifying them throughout the years, adding carrots and peppers, I have adapted them to my own taste.

Green tomato salad is very easy to make and its flavour is surprisingly delicate, compared to other vinegared preserves. It never fails to impress those who taste it for the first time, since most people expect it very sour and harsh. The onions make the vinegar brine mellower, the carrots give a crunchy side and together with the peppers, they make the jars look merrier. If you remember the Moomins’ Cucumber Salad, the process of making this one is very similar. As you see on the photo above, green tomatoes quickly become yellowish, but both carrots and red peppers keep their bright colours.

This salad is a great side dish and an excellent alternative to cucumbers, tomatoes and lettuce in sandwiches. It is best when served chilled.

Preparation: about 1 hour + hot water bath or another processing method

Slice the tomatoes and the onions.

Slice the carrots finely (the best would be to use a mandolin).

Put the vinegar, the water, the sugar and the salt in a pan. Bring to boil and let it on medium heat for 10 minutes.

Pack the vegetables tightly in jars, distributing evenly the pepper corns, the mustard grains and the bits of bay leaves.

Fill the jars until about 80% of the jars’ height.

Pour the hot (not boiling) vinegar mixture over the vegetables, leaving about 2,5 cm space below the lid.

Cover with lids and let the jars cool. (You can leave them overnight).

/At this point you can (after the jars have cooled down)  either keep them in the fridge for a couple of weeks or process as described below and store in your pantry for at least a year!/

Leave the jars to cool.

Place the cool jars into a big pan, bottom lined with an old kitchen towel folded in two (this will prevent the jars from breaking), cover up with hot – but not boiling- water to the level just below the lid. Bring to boil and keep on a very low heat, in simmering water, for around 20 minutes.

Stick on self-adhesive labels, write the name of the salad and don’t forget to mark the date.

NOTE: For the readers who live in the USA, the USDA-approved canning method is different. You can find it described here: http://www.uga.edu/nchfp/publications/uga/using_bw_canners.html.