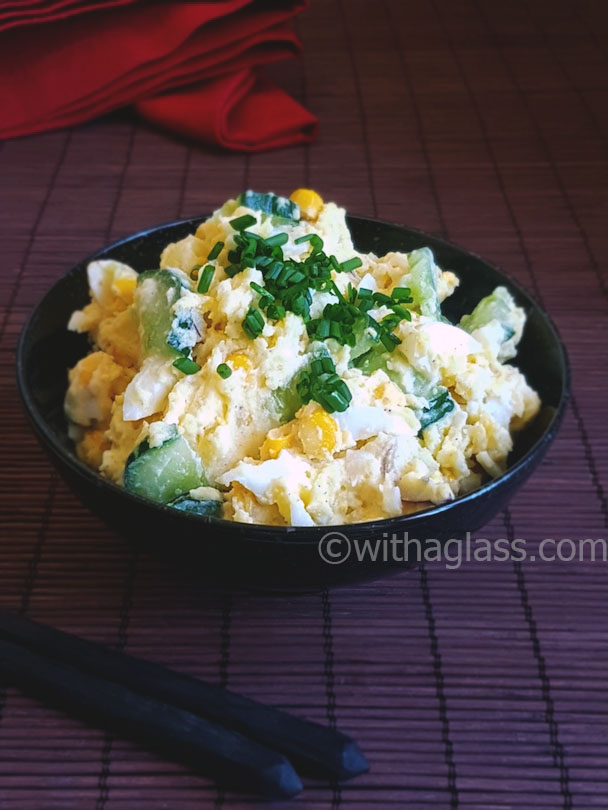 There are so many Japanese potato salad recipes on blogs and websites, often written by Japanese cooks, I hesitated a lot before posting it, but then I thought (once more!) that my blog is not only about sharing what I have just discovered, but also about what I consider as a daily fare, but still love, after years and years of cooking. The latter is the case of the Japanese potato salad: if I remember well, I started to prepare it even before my first travel to Japan (and I think it was 8 years ago!). My husband loves it as much as I do, so whenever I consider buying potatoes, this salad is the first thing that comes to mind.

Those who aren’t familiar with this salad, might wonder what’s so special about it. First of all, the texture is its most important difference. Potatoes aren’t kept in chunks or slices, but crushed and this dish could probably be called “chunky mashed potatoes” instead. It might sound weird, but it makes this salad irresistible, refreshing and the creaminess of the mash creates a contrast with the other ingredients. Whenever I had this salad in Japan, the ingredients varied and the only recurrent ones were fresh cucumber and hard-boiled eggs (though ham – or rather the thing the Japanese call “ham”… – was also included in the majority of versions);  I once even had one made with sweet potatoes (and hated it because I don’t like them). I also couldn’t omit the fact that potato salad sandwiches are available everywhere and, actually, they are fantastic and strangely don’t feel like sandwiches with… potatoes.

Seeing different versions on Japanese web sources (I’ve recently seen one with grapefruit!), I’ve always felt free to improvise and throughout the years created my own basic recipe: apart from the obligatory three ingredients, I always include finely sliced red onion and corn (freshly cooked or usually canned). I also try to use the Japanese mayonnaise, which is by far my favourite, even in its “light” version (but any good mayonnaise will, do of course). This salad is great at any time of the day, in any season: as a lunch, snack, breakfast and, even as a sandwich spread, so I prepare it simply whenever I crave it.

TIPS: This salad doesn’t taste even half as good if made with potatoes cooked the day before. If you have no choice, in order to improve the taste, warm the one-day old potatoes in a microwave before crushing them.

You don’t need to add lots of mayonnaise, since the salad is creamy (I usually add one tablespoon per one big potato).

If you like ground pepper (like I do!), add lots of it here. I find that any egg dish is highly improved with the presence of black pepper and a potato salad even more.

The below amounts are just an indication. I adjust the ratio according to my mood, the ingredients I have, etc. (for example I add more cucumber if I want a lighter salad).

I think that rice vinegar makes this salad even better (I must have seen this tip on a Japanese web or blog…). Add some, if you want to see the difference, but start with a teaspoonful first and adjust after mixing, if needed.

TRAVEL TIP: If you don’t speak or read Japanese, find yourself in an izakaya (an equivalent of a pub in Japan) where no one speaks English and there is no English menu, ask for “poteto sarada” because there is a big chance they’ll have it.

Ingredients (serves two as a lunch, if served, for example, with another, leaf-based or tomato salad):

corn from 1 big cob (or a small can of corn)

(a dash of good rice vinegar)

First cook the potatoes (of course it’s best to cook them whole, with skin on, but if you are in a hurry you can cut them into equally sized pieces and cut down the cooking time).

In the meantime hard-boil the eggs.

If using fresh corn, cook it until soft (five-ten minutes, depending on how “young” it is).

Cut the cucumber in two lengthwise, then slice finely. (If you have a small variety of cucumbers, simply slice them).

Place the cucumber into a bowl, sprinkle with salt and put aside for 10-15 minutes. After that time squeeze the water from the cucumber pieces, dry them and put them aside (you might also rinse them if you want to remove as much as as possible).

Slice the red onion very finely (I use a mandolin).

Peel the cooked potatoes while they are still warm (as warm as possible, but possible to handle with your hands). Cut them roughly and place into a big bowl. Season with salt and pepper and crush with a fork.

Add the roughly chopped eggs, the cucumber, the red onion and the corn (and the ham, if using).

Add the mayonnaise, the rice vinegar, if using, and mix everything well with a fork. Put into the fridge for at least one hour.

You can sprinkle it with chopped chives before serving.